The gate to Xin’an Ancient Town.

A while ago, a dear friend of mine gave me a guidebook to Brussels called Secret Brussels, which is part of a series that focuses on the more uncommon sights and attractions in (mostly) European cities. The places featured in these books are well-known and draw thousands, if not millions of tourists each year. It amazes me how many guidebooks of places such as Brussels, Rome, or Paris are still sold each year, not only because so much information can be found on the internet, but also because the majority of guidebooks provide exactly the same information. What is missing, are books about cities such as Shenzhen, where nearly every sight is a secret. 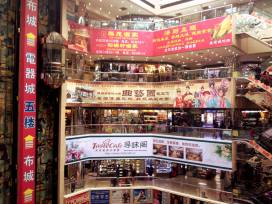 According to most of the information about Shenzhen, this is the place to be: Luohu Commercial Centre.

When I first visited Shenzhen seven years ago the only attractions promoted were Window of the World, Splendid China, Minsk World, and the Luohu Commercial Centre. Shenzhen was a place to do business and shop for cheap knock-offs. I spent hours on the internet trying to find websites that mentioned other places and succeeded in the end. Although it has become easier to find out about places such as Dapeng Fortress, the Hakka Museum in Longgang, and the Tian Hou Temple in Chiwan, most people visiting, or even living in Shenzhen will not have visited these places, because tourist information is still sparse and requires some research. 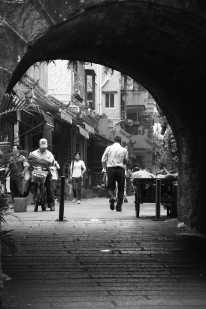 Xin’an is one of Shenzhen’s (still) many ‘urban villages’.

One of the more hidden places in Shenzhen is Xin’an Ancient City (Xin’an gu cheng 新安古城), also known as Nantou (南头) in the district Nanshan. It’s a fascinating part of town where very old is mixed with more or less new. During the Ming dynasty Xin’an was the seat of government of a county bearing the same name, which encompassed today’s Shenzhen, Hong Kong, and Huizhou. Parts of the old city walls and gates are still visible, as well as the buildings of an opium den, a silver shop, a brothel, and official headquarters. In one of the alleys there is an eighteenth century stele denouncing the evils of prostitution.

A lot of the old stuff has been restored and rebuilt, which may put off those who prefer more ‘authentic’ heritage, but the fact that the local authorities have bothered preserving these remains and dedicating a small museum to this site means they do think this heritage is important. One of the more fascinating buildings is the Nantou Catholic Church, which was originally founded in 1913 by the Canossian Sisters as an orphanage. During the Cultural Revolution the church building was turned into a school, which probably saved it from demolition. Shenzhen listed the building as a cultural relic in 1984 and it has been included in the Guangdong Province Cultural Protection Unit since 2003. In 1992 the building was reinstated as a Catholic church, where, surprisingly, the Pope’s portrait is well-represented. 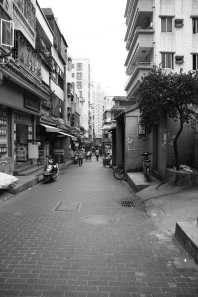 Despite being known for its modern appearance and innovative spirit, there is still attention for the old in Shenzhen. However, this is a relatively recent trend and many old buildings have indeed been destroyed. Besides the very old, there is also the recent old that must not be forgotten. The Ming and Qing dynasty buildings in Xin’an are surrounded by relatively low storey buildings from the 1980s and early 1990s. As the city is modernising, many of these buildings and its accompanying ‘urban villages’ are disappearing, because few people see their historic value. Considering that they are the first buildings of the city of Shenzhen, they are certainly an important part of local heritage, as this article argues. Heritage conservation is a tricky business, especially with so many interests involved. I hope the government will see as much value in these piles of concrete as they do in the ancient piles of bricks.

Courtyard of the Nantou Catholic Church, surrounded by modern buildings.